The West Grimstead Play Reading Group meet regularly once a month in various different homes.  If you would like to come along and enjoy an evening with us, please contact Gwenneth Doran on 01722 710124 or Lindy Palmour 01722 710019..

Do come along and join us – you will be very welcome.

The dates of the group’s meetings for 2019 are as follows:

December meeting to be advised. Please make a note in your 2019 diaries now!

The dates of our meetings for 2018 are as follows:

To commemorate the centenary of the end of World War 1, the group performed a play written by Ivan Raynsford-Smith and produced by Lindy Paramor called “Armistice Day 1918” in which the characters from 1914 came back and spoke of their war experiences. Martin, played by Robert Pennington, was a young lad at the outbreak of the war. Now a man, he broods over the loss of an arm at the Battle of the Somme and that he is still selling newspapers. The newspaper vendor, played by Malcolm Read, tells him to cheer up as an Armistice is about to happen. They are joined by Margery, played by Maureen Lawrence, who replaced Martin as newspaper girl and drove a tram during the war. She believes that women can do jobs just as well as men in which she is supported by Mabel, played by Gill Sowerby, an ardent suffragette. Edith, played by Cecilia Marshall, a Neutrality League member, joins them and two city gents, Donald and Alistair, played by Alan Bannister and Ivan Raynsford-Smith, who came through the war although Alistair was wounded. Nelly and Vera, two working class women, played by Pat Hewett and Barbara Coulson, talk about the affect the war has had on them, particularly Nelly who had ten children to look after whilst her husband was away and, to feed them, came to an “arrangement” with Billy the boss-eyed butcher. A Trumpeter (Miriam Dubas) plays reveille and an Official, played by Graham Paramor, announces that at 11 o’clock that day, 11 November, the war will end; everyone stands quietly remembering the price paid for this peace while the Trumpeter plays The Last Post after which there is cheering, God Save the King and the singing of Land of Hope and Glory. Mabel, Edith and Margery discuss the future for women and brandish placards saying Votes for Women. Donald reads Siegfried Sassoon’s poems “The General” and “Attack” describing going over the top and they think about their old school chums who have not come home agreeing that, although they will return to university, life will never be the same again. The Armistice was signed at 5.00am and all Commanding Officers were told that it became effective at 11.00am, but some officers insisted that their men continued to fight and we heard Private Machlin’s report, read by Malcolm Read, of his Commanding Officer ordering his men to cross the River Meuse and attack the Germans that very morning. Marion Harding, played by Moura MacDonagh, spoke of her husband, Stanley, a lieutenant serving with the 2nd Warwickshire Division, and read a letter from him speaking of her relief that he was safe. Each character spoke of the horrors and that we must never forget the sacrifice made. The Trumpeter played The Last Post followed by We Will Remember Them said by everyone. Lindy Paramor read “The Soldier” by Rupert Brooke, Cecilia Marshall read “In Flanders Fields” by John MacCrae and Robert Pennington read “Armistice Day 1918” by Robert Graves. The evening ended with the singing of popular songs of the period accompanied on the piano by Janice Ford after which tea and cake were served.

May we say Thank You to the Village Hall Committee for use of the hall, to Miriam Dubas of Downton Brass Band for playing the trumpet, to Gill Sowerby for props and costumes, to Carol Hastings, Janice Ford and Peter Ford for serving refreshments, to Prue Castle, Cynthia Bannister, Janice Ford, Marjorie King, Pat Hewett and Gill Sowerby who made cakes, to Janice Ford for playing the piano, to Peter Ford for taking photographs and to everyone who came on a very wet and windy evening to support the event. You were all so much appreciated.

In July , 2018, we held a Favourites Evening when members brought along their favourite poems, pieces of prose or any other items which they particularly liked and wanted to share. There were some amusing family monologues and some fascinating personal anecdotes and it was a very pleasant and enjoyable evening. We didn’t meet in August so our next meeting was in September. However, as this year sees the centenary of the end of WW1, we are putting together a revue comprising songs, readings and an acted playlet to commemorate this event which will be performed in the Village Hall on Friday 9 November. Therefore, our future meetings will given to rehearsals and preparation for this revue rather than reading plays. Further details will be publicised so do look out for them

In March, we read Of Mice and Men by John Steinbeck and a report will be in the next issue. Our next meeting is on Monday 23 April  (Peter and Janice Ford’s home), play to be advised.

In February, we read “Every Good Boy Deserves Favour” by Tom Stoppard. The play concerns a dissident, Alexander Ivanov, who is imprisoned in a Soviet mental hospital from which he will not be released until he admits that his statements against the government were caused by a (non-existent) mental disorder. In the hospital, Alexander shares a cell with a genuinely disturbed schizophrenic, also called Ivanov, who believes he has a symphony orchestra under his command. Meanwhile, Alexander’s son, Sacha, is seen in a school classroom with a teacher who attempts to convince him of the genuineness of his father’s illness.

An intriguing play which we found interesting to read.

Note: Tom Stoppard required the play to include a full orchestra in addition to the cast of actors and its 1977 premiere, staged at the Royal Festival Hall, included the London Symphony Orchestra conducted by Andre Previn. However, for logistical reasons, an orchestra is often omitted from performances.

Our October meeting was cancelled and so our next meeting was in November when we read Romanov and Juliet by Peter Ustinov and a report will be in the next issue. Please ask for details of our December meeting.

In September, we read Spider’s Web by Agatha Christie. Clarissa, Hailsham-Brown, wife of a Foreign Office diplomat, is adept at spinning tales of adventure, but when a murder takes place in her drawing room, she finds live drama much harder to cope with. Desperate to dispose of the body before her husband arrives with an important politician, she enlists the help of her guests – Sir Rowland Delahaye, Hugh Birch and Jeremy Warrender. Hilarity ensues when they are interrupted by the arrival of wry detective, Inspector Lord.

A report on our October meeting when we read Romanov and Juliet by Peter Ustinov will be in the next issue. Our next meeting will be on Monday 20 November at Hollyville (Graham and Lindy Paramor’s home), play to be decided.

July meeting.  As 2017 is the bicentenary of the death of Jane Austen on 18 July 1817, our July meeting was a remembrance beginning with a toast to her after which we read Wedding at Pemberley by Anne and Arthur Russell who describe it as “A footnote to Pride and Prejudice”. It is the day before the wedding of Georgiana, Mr Darcy’s sister, and Elizabeth Darcy and Jane Bingley (formerly Elizabeth and Jane Bennet) and Catherine Bennet are discussing the arrangements. Jane says she has heard from their cousin, Mr Collins, that their notorious youngest sister, Lydia Wickham, and her husband, George, are in Derbyshire and intend causing mischief at the wedding. While the sisters are discussing if it is appropriate for Lydia and George to attend the wedding, their mother, Mrs Bennet, comes in wearing a bonnet over-decorated with ribbons, birds, fruit and flowers and tells them that this is her wedding bonnet. The girls are appalled and try to persuade her not to wear it, but in vain. Lydia arrives with a plan from George to discredit Georgiana. She claims that, when Georgiana was staying in Ramsgate, she eloped with him and wrote him some indiscreet letters which he is now threatening to publish unless he receives payment. However, Elizabeth, with the help of the housekeeper, Mrs Reynolds, proves that not only did Georgiana not elope with George, but that she could not have written the letters as she had a poisoned hand at the time which she could not use. Lydia, always extravagant and in financial difficulties, will do anything for money and George’s plan having been thwarted, agrees with her sisters that “for a consideration”, she will take their mother’s bonnet away. However, unknown to them, she has already wheedled the cost of a muff and tippet out of her mother by telling her that her sisters will not settle her account at the local inn. Lydia has double-crossed them; she has the money for her muff and tippet, her sisters’ money and Mrs Bennet still has her bonnet and intends to wear it at the wedding. The play ends with Elizabeth suggesting that the bonnet is “accidentally” found by Jenny, their pet goat, who like most goats will eat anything!

An amusing play which we very much enjoyed reading and followed with our selections from Jane Austen’s novels and other items about her. We didn’t meet in August and a report on our September meeting will be in the November issue. Our next meeting is on Monday 23 October  (Frank and Gwynneth Doran’s home) to read Romanov and Juliet by Peter Ustinov.

Do come along and join us – you will be very welcome.

St George’s Day Entertainment: Following the fayre in the afternoon, the evening’s entertainment began with a presentation by the West Grimstead Play Reading Group of A Potty History of England by Gwynneth Doran and Cecilia Marshall which was very amusing and gave a whole new slant on England’s history! This was followed by a performance of Music for St George’s Day by the Landford Handbell Ringers.

After the interval George Fleming and the West Grimstead Play Reading Group performed Where’s George? by George Fleming, a light hearted look at England’s patron saint. Britannia (Janice Ford) complains that her husband, St George (Malcolm Read) is always going away to perform heroic deeds instead of doing his duty at home, leaving her alone to face dangers. St George arranges for St Patrick (Pat Hewett) and St Andrew (Jane Toulson) to protect her from the villains Osama Bin Liner (Cecilia Marshall) and Chirac (Gwynneth Doran) during his absence, but they lure the saints to the local pub and get them drunk. Meanwhile a messenger (Betty Barnett) tells Britannia that St George has suffered injuries during his travels, but she is not worried as she has the saints to protect her (not knowing they have been nobbled by the villains).

The villains disguise themselves as the saints, capture Britannia and tie her to the railway line, but St George returns, routs the villains and rescues her. Throughout the play, the dragon, Fiery Reg (Sharon Finmore-Wooldridge) makes threatening appearances and is covered by two fire fighters (Barry Pritchard and Peter Ford) with fire extinguishers. Barbara Coulson was the narrator, Murray Marshall provided excellent musical accompaniment at the piano, and George Fleming encouraged the audience to join in by raising placards asking them to boo and hiss or clap and cheer as the character prompted.

The play ended with a rousing rendition of He is an Englishman from HMS Pinafore by Gilbert and Sullivan. A very special Thank You to George Fleming for not only joining with us in A Potty History of England, but for scripting and producing Where’s George? 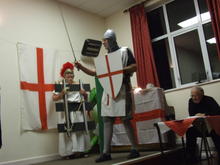 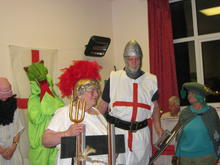 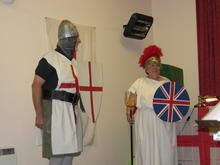 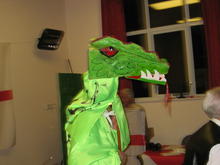