We were met by Joanne Munday, one of the paramedics, who took us to see the helicopter and told us about the service. The helicopter is equipped with exactly the same facilities as a road ambulance and when on call-out, is staffed by a paramedic, a police observer (the service is run jointly with Wiltshire Police) and a pilot. The service is on call virtually 24 hours, 7 days a week and goes wherever it is needed – there are no criteria for call outs.

We had a good look around and in the helicopter which is a modern design having no secondary tail rotor, but a rear jet, to balance the overhead rotor. Not only does this mean more efficiency, but also makes landing in confined spaces easier as there is no tail rotor to be broken off. We presented our cheque to Joanne, but the service had provided a large cheque which we all gathered around with her whilst one of her colleagues took photographs.

We then adjourned into the headquarters (just in time as the rain started to come down heavily) where we made purchases from an attractive selection of items the service sells to raise funds. We were very impressed by what we learnt about the service and concerned that such worthwhile work should be funded entirely by charitable donations.

Therefore, the Village Hall Committee will organise another event for them in the future which we hope will be as well supported as the skittles evening was.

For more information about the Wiltshire Air Ambulance Service, go to their website :- www.wiltshireairambulance.co.uk

For a report on our cheque presentation, click on the first item – Wiltshire Air Ambulance; this will bring up the home page.

Across the top is a list of options, ie: About Us, Crew, Helicopter, Incidents, Events, etc. Click on Thank You – this will bring up the Thank You page where you will find us. 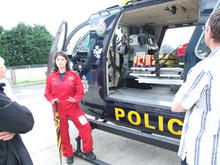 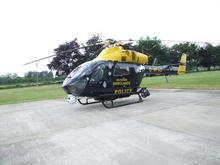 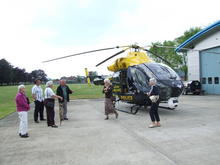 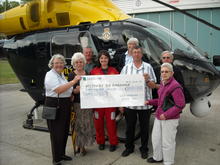 It was a really fun evening. The Ceilidh group, Scrape the Barrel, with their caller, Paul Matthews, played a wonderful selection of dance music and, while we got our breath back between dances, they played a lovely range of songs and music for us to listen to.

We thoroughly enjoyed the dance routines and, in some cases, we actually managed to get the sequence right and go in the right direction! Betty Barnett looked after the door; Sue Pritchard and Lin Shrapnell sold raffle tickets for a selection of attractive prizes; and Barry Pritchard and Martin Fry looked after the bar – including the firkin of real ale.

The buffet supper was provided by Prue Castle, Helen Birchenough, Sheila Futcher and Janice Ford and was very much enjoyed.

May we say a big Thank You to Paul and Scrape the Barrel for giving us such an entertaining evening, to Betty, Sue, Lin, Barry, Martin, Prue, Helen, Sheila and Janice, and to everyone who came – without you, we would not have had such a marvellous evening. 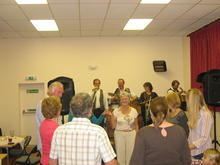 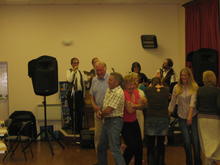 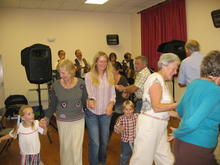 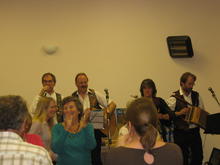 Lorna Kingdon saw quizzers in at the door; our quizmaster, Barry Pritchard, really kept the evening sparkling with Lin Shrapnell and Ivy Spicer doing a great job as quiz hostesses.

Ray and Trisha Woodley did a roaring trade on the bar and Julia Hardwick was kept busy selling raffle tickets for a selection of attractive prizes.

The evening started a little differently from usual with a music round when Janice Ford played a selection of Irish tunes on the piano for quizzers to identify and then answer questions about. This was followed by rounds on general knowledge and specialist subjects which took us to supper time when we enjoyed a delicious supper prepared by Martyn Fry comprising Irish stew with Irish soda bread followed by Irish chocolate cream liqueur tart; absolutely scrummy – no wonder everyone went up for seconds!

After supper, the raffle was drawn followed by the answers to Heather Yaxley’s ingenious suppertime quiz on an Irish theme. This was won by The Banshees to whom Barry presented a basket decorated with rabbits containing chocolate crème eggs.

May we say a big THANK YOU to Lorna, Barry, Lin, Ivy, Ray, Trisha, Julia, Janice, Martyn, Heather and Peter, to everyone who helped to set up and clear away, donated raffle prizes and supported the event by coming. 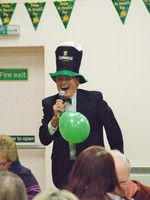 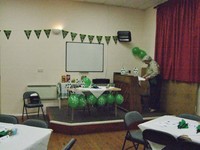 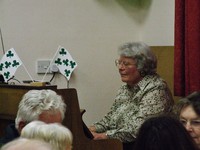 Can you name the players ?.. Bottom Row:- I think I spy a Bayford ?, 3rd from right , next Joselyn Kirby? Can anyone else add some names.

According to Peter Elliot (ex resident) this was a school Pantomime “Jack and The Beanstalk” and according to the School Log Book, was held at the WSHS in Chippenham, took place on 28th January 1955,

Do you know any of these people ? If you wish to Hire this venue for your special event, meeting, classes etc…. please contact us on email:-   bookings@westgrimsteadvillagehall.co.uk

We are very proud of our village hall with it’s cosy, friendly, light atmosphere !  There is a small stage for bands, cabaret, etc.. and crockery, utensils and a lovely big kitchen if you wish to do the catering yourselves.

Please join us and help in fundraising for our Village Hall.  . 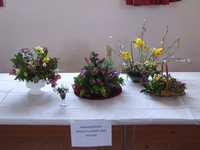 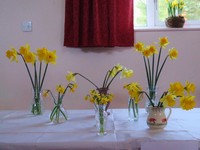 BURNS NIGHT SUPPER Lorna Kingdon saw people in at the door after which our Master of Ceremonies, Barry Pritchard, welcomed everyone. Malcolm Read said Grace which was followed by the supper, superbly cooked by our Chef, Martyn Fry, and starting with cock-a- leekie soup after which Barry gave the Selkirk Grace in a “Scottish” accent with frequent corrections of pronunciation by George Fleming!

The haggis was piped in by our Piper, Ian Wallace, and carried by Martyn after which George gave the address to haggis. After giving it the initial stab, George proceeded down the hall continuing the address as he went. Suddenly, he turned and, drawing himself up, brandished his claymore, charged down the hall with a roar which would have warmed the heart of a clan chieftain and speared the haggis. The haggis was piped out by Ian followed by Martyn, Ian remaining to play to us whilst Martyn plated the haggis accompanied by neeps (swedes) and tatties (potatoes), served by Trisha Woodley, Ivy Spicer, Ray Woodley and Janice Ford, George circulating to dispense whisky on the haggis.

The supper concluded with Tipsy Laird, a Scottish whisky trifle, followed by the cheese board, coffee and tea with shortbread. Graham Paramor and George Todd did a roaring trade on the bar, Barbara Coulson sold raffle tickets for a selection of attractive Scottish-themed prizes and Peter Ford took photographs. The raffle was drawn, and the spot prize was won by Beryl Morby to whom Barry presented a box of shortbread. George tried to speak about Robert Burns, but was regularly “interrupted” by Barry. We stood to toast Scotland’s Bard and then sang a selection of traditional Scottish songs.

Barry thanked all those who had contributed and attended, particularly thanking George and Liz Bayford for 40 years’ service to our local parish councils. Janice thanked Barry for being our Master of Ceremonies and the evening ended with the singing of Auld Lang Syne.

May we say a very big Thank You to Martyn, his wife, Ruth, who assisted him with the preparation of the supper, to George, Ian and Barry, to Barbara, Lorna, Graham and George, Ray, Peter and Janice, and a special Thank You to Ivy and Trisha who not only assisted with serving, but also did sterling work in the kitchen assisting Martyn; to everyone who helped to set up and clear away and, of course, to everyone who came and supported the evening.